ago. But if you wish to check out the new antivirus, then you won't get it especially when

you are in Windows 10 insider preview 15058, the windows 10 creators update preview

If you can't open Windows Defender Antivirus in Windows 10 insider preview 15058, then you are not alone, there are many people experiencing the issue, because of a bug.


I don't know what caused it, but if you are the one who depends on inbuilt antivirus like

Windows defender, then don't worry, we have an alternative solution anyway. 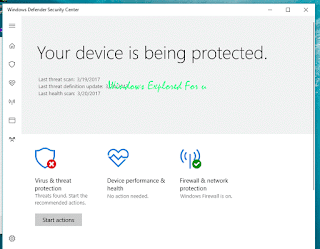 It is much powerful than the previous one,..!

You can use it by, searching the Windows defender Security application on start menu and

selecting the top most result.

Maybe Microsoft wants insiders to try the new app, instead of the old Windows Defender !

(If the old thing was blocked, then we will be forced to try the new one,isn't it..?)