Uninstall system apps in Windows 10 Creators update ??, yah ! there is a way to uninstall the apps

we call it a system app or bloatware. We did that using Powershell in our earlier Windows 10

editions. But in Windows 10 Creators update, when you think about uninstalling all apps at once

using the command Remove-AppxPackage then it will seriously affect your system performance.


Why ? the answer is simple most of the options included in the windows 10 OS are now replaced

Microsoft team might had thought,  a clean fresh UI will satisfy the customers and it is the only way

to make them to spend more time on their PC . Of course, it's necessary to satisfy customers so

name of trusted windows store app. But what for other intermediate users like us ? we often

Today, while i planned to examine what are the things they had changed in Windows 10 Creators

update, i seen this.. Most of the options are now converted into system app. 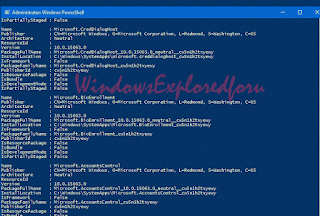 If you seen the above thing, then you will know why removing app package will make your PC

broken. The above one shows AccountsControl is a system package name which is likely to perform

the operation of account control on our PC,  So what if we uninstall it using get-appxpackage|remove-appxpackage -confirm and then y ?

Our accounts control package and bio package will get removed. So when i open account control or bio metric system, my PC won't work.

Like the above, there are many things now are in the form of application or system ui, removing

them will make our PC to miss that option.

The only way to escape from this, is not removing all the packages at once. So don't remove all

packages using powershell instead remove only the packages you don't need like .zunemusic,