Windows 10 Anniversary Update 2016 Released ! Here is how you can get the anniversary update

Windows 10 the OS released on July 29.2015 Exactly a year ago has a new update scheduled to hit

[See : How to upgrade to latest Windows 10 build]

It has some new changes

Some of the notable things are....

[See : How to turn off cortana after Windows 10 anniversary update]

4. Bug Fixes. and Much more(Which will be covered in new articles after they are tested XD)

Ok,let's see how to update your Computer to this latest update...

[See: How to Check what build you are using right now]

available in your location,you can perform such operations manually..

Update : Wait !! The update is not yet available through Windows Update,Check this link it has the tested working way.. [Link] 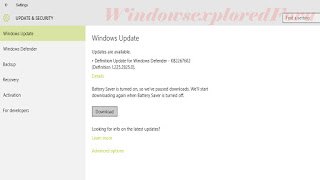 Step 3 : It Will Open Windows Update,which will automatically download updates when they are

available.(Makesure your PC has internet connection at that time)

[Click to See the alternative best way: How to upgrade to latest Windows 10 build]

Note : Initially,the update will be made available only for some selected regions.Your region may be in that list if you are lucky!.So be patient,your pc will definitely receive such updates but may be delayed sometimes depends on your location.
Logesh July 31, 2016 Let me Share my thoughts!

Windows 10 Anniversary Update 2016 Released ! Here is how you can get the anniversary update
4/ 5
Oleh Logesh

Comments in this blog are always welcomed, but not Spam ! Thanks for your understanding :)