Long story, Short! today i actually forgot the way i used to check device model and processor related information of my Kali linux machine, that made me to write a separate post for this (at least i can refer this when i did on the next instance😂).

Also read : Will your Metadata Shared when you share Picture on WhatsApp ? (or) Does WhatsApp Send photo Metadata ?

So, Whether you are a rookie learning Kali linux or an experienced user who don't remember exactly the way we used to find device model or computer manufacturer information in Kali Linux.. You had landed to correct page.! Okay, let's get in to the post..

How to find Manufacturer information or device model in Kali Linux

Finding Manufacturer information is not a big task, though there are couple of commands you can enter by firing up your terminal, the sad truth is we as a command line users won't be able to remember every command in the system world😕
So, i will show both the ways, which are nothing but Using GUI and CLI..
If you are using Graphical user interface, the first step you have to do is to open File Manager or Files App.
Once you had opened that, Go to your System di rectory where OS files will be there..
Usually it will be in the name of drive called "Computer" or "Basic data partition".
How do i know i'm on system drive of my kali machine? Simple, One of the easiest way to know that is, you will see Strange files that are not known to you or a file with unusual names. Example for that is boot, bin,  debootstrap, etc..!
So, once you are on that folder, Open the folder named "proc". It will have different folders, Just scroll down and find the file called "cpuinfo"
That's it.. You can see all the information there, Your processor, vendor_id, model and the model name and so on.. 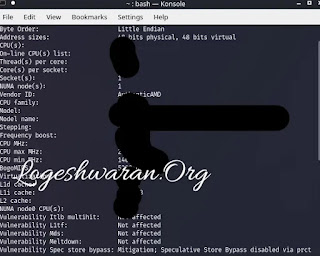 Its a long way, how to do that with simple command that is using command line? I'm sure there will be a linux systeminfo command exists for linux as well..! Yes, you are right.:) There are multiple commands available for that, i will share the simplest one..!
Your Kali linux will display all those details..
Bonus tip: For Next time, you can remember the command as "Linux System CPU" .
Happy Learning..!
Logeshwaran February 19, 2021 Let me Share my thoughts!