Will your Metadata Shared when you share Picture on WhatsApp ? (or) Does WhatsApp Send photo Metadata ? 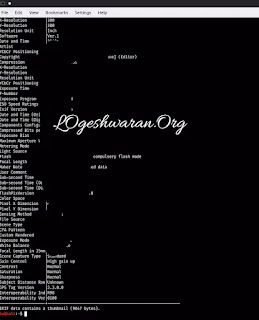 One of the words, we hear right now ever since WhatsApp changed its privacy policy for Indian Users where Opting out of data sharing is near to impossible is Metadata. Though its a different story where Users started to migrate to Telegram and Signal, this Metadata still worries a lot for the people. So, i decided to write a separate post on this.
But, before that if you are newbie,you have to know what Metadata means first, right? So, let me explain that first in a simple words. Metadata just means, data about your data.. Let me explain with an example..
Nowadays, everyone uses smartphone and DSLR's to take photos right, when you viewed the Photo in the gallery or Photos app and clicked on info or details tab. It will display the details like in which phone it was taken, what kind of setting/resolution was used. So, that's just an example of that Metadata.
You might have heard about Exif ( Exchangable image File format) which is nothing but the standard specific format for storing images, that's what the people say when they say metadata.
You don't need to trust me, if you are having Windows OS, right on the image and click on properties. If you are using Kali linux you can use the Kali's inbuilt exif tool.
Run Exif "Image name" on terminal You won't be surprised:)
So, does it mean they can trace the person with just the help of image? The answer is "Yes" as it contains details like model, resolution,including location co-ordinates where the photo was taken. If your device's location is ON. ( which is by default turned on, on most devices.) do you think that's not enough when used with other services to trace? More than enough! right?
So, the question is whether this metadata will be shared when you share a picture on WhatsApp or updated WhatsApp status. The answer is Yes and No..!
Yes and No? i don't want to confuse you..
I will share in Short.
If you are sharing the photo to a contact, then you are on safer side. Because. when i analysed, WhatsApp seems to have removed the metadata to compress images. So, extracting data is a little bit difficult.
But, but there are people who knows the Other way around. Sharing the pictures as Document which shares the images as it is without any loss in quality (If u are unaware, then start using that with your trusted contacts for extra clarity) if you are one then that's a bad news. Because we can extract the data easily as nothing is removed at the time of sharing files..
Does that mean, i shouldn't share selecting as document, which preserves the clarity. The answer! hmm i leave it upto you.. If you know the other person is trust Worthy and won't share Outside, go ahead, else send in normal photo.
If you ask me, further, i would say don't share anything on internet if you are kind of privacy Person.! Because privacy is gone when the internet started to rise😀 Its just couple of good hearted persons, work hard to bring it back..!
What do you think..?
Logeshwaran February 16, 2021 Let me Share my thoughts!