How to move my Groove music pass to spotify ? this is the question probably, that may rise

in mind of most of the people  as Microsoft had announced that, its migrating to better

I have a groove music pass account, so what will happen to my account and my Music?

All your stuffs that you had in groove music can be still used after migrating to spotify.

You can move from Groove music to spotify by following the below steps:

-> select the top most result

2) Once, groove music app opens, sign in using your credentials.

3) After signing in, you will see popup notification from Microsoft,

service. Spotify is the World's leading free and premium music streaming service, with

As part of this Partnership, the Groove music pass service will be discontinued on

So, Click on "Move my music to Spotify" button. 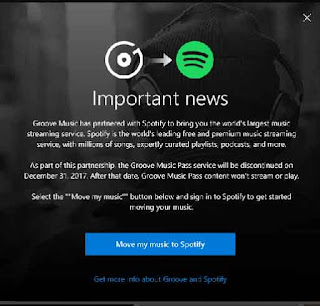 4) After selecting the option, you can see " Connecting to a Service, Spotify" popup.

You will see two options on the popup, Login to Spotify or Sign up for spotify

If you are an existing spotify user, simply enter your spotify username and password after

but, on the other case, if you dont have spotify account, simply tap Sign up for spotify

(It will ask you some questions for signing up, simply follow the onscreen instructions.)

5) You will see next window, "Move My music", with some text like "We are ready to move

6) All other things will be taken care by the system, you will receive another popup stating

that "All done" and you will see "Launch Spotify" option. 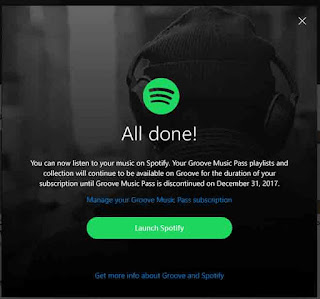 That's it, you had successfully switched from groove music to spotify.

As per the statement released by Microsoft,

So, you can migrate till January 31, 2018 and hope Microsoft will extend the deadline after that...

This post was last published and Updated on October 3, 2017.