Surface Neo, that's the name of the new dual screen laptop Microsoft unveiled today.  The specialty of this Surface neo is you can work two different things on this two different areas. For example : In one screen you can use browser, while on the lower screen you can do the other task like editing, of course its just an example and you can use it for anything. 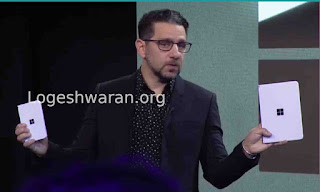 Powered by Intel Lake Processor, It will be similar to HP Omen x 2S but in a slightly modified way this laptop/Tablet will have touch screen on both the sides and there will be no lag or conflicts between the two screens and you can carry it anywhere like a textbook as it weights just 655 grams making it a big new innovation.

As confirmed by rumors, Microsoft Made this possible by all new Windows OS, Windows 10X specially designed for this dual screen device.

This Surface Neo will be available from Next year.